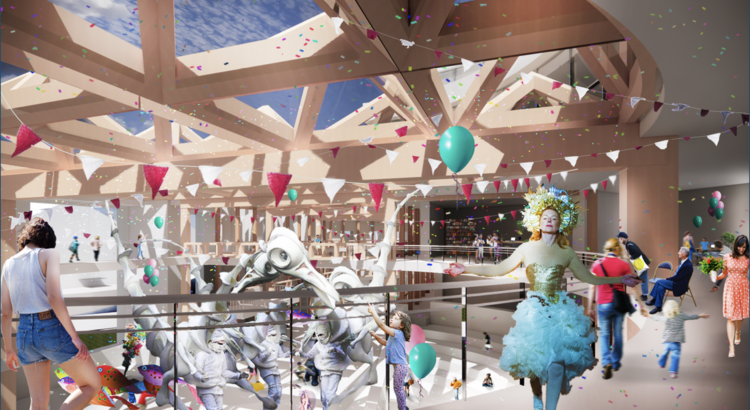 Using Galway as their testing ground, the Dublin School of Architecture, TU Dublin final year BArch students responded through architectural design to Bauman’s hopeful vision of what a city might be. They began at a distance, by exploring the rich history of the place and the key factors in its constitution. Moving closer, they engaged with local stakeholders and agencies, teasing out important questions for the resilient future of the city, and making imaginative future projections out of the city’s past. Moving closer still, they read the character of the city’s fabric, finding locations for intervention through architectural design with a social and environmental aspiration and with a consciousness of key issues of public interest in the city’s life.

In this exhibition, you will see evidence of the students’ concern for a responsible yet innovative and celebratory practice of architecture. Some worked with existing buildings, imagining exciting new lives for them. Others examined where and how Galwegians might most sustainably live and work in the future. There are proposals to re-invigorate the city centre that draw on its citizens’ vitality. There are studies that repair the city’s edge and deal with its expansion in sensitive or provocative ways. There is an overarching concern for the city’s environment, and how this might be sustained.

The selected students have risen to the extraordinary challenge of looking outwards, expansively, while being locked in their own studios-of-one. In their promotion of a resilient future for Galway, they have time and again proved their own personal and professional resilience, which will serve the future practice of architecture well.

Architecture at the Edge

About Architecture at the Edge (AATE) is a not-for-profit organisation dedicated to the promotion of architecture as culture. Established in Galway in 2017, it invites everyone to explore and understand the value of a well-designed built environment. We aim to demonstrate how design enhances everyday life and to inspire new ways of thinking about architecture.
URL www.architectureattheedge.com
Instagram @ArchAtTheEdge
Twitter @ArchAtTheEdge